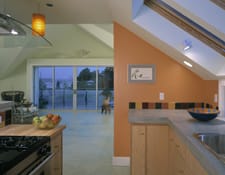 It was ten years ago today that we had our first Sunday open house at the 42nd Street Condos.

This was a project that began when Cynthia Creasey & Brian Tschider of Cobalt Construction decided to buy a small house on the corner of Winslow Place N and N 42nd St with an eye toward building a small apartment house on the lot.

Greg Bjarko and Chris Serra of BjarkoSerra Architects came up with the design of having two full-floor units at the top and bottom, and two half-sized units on the middle floor.

The project took twenty-six months from the first permit application until the opening, and as you can imagine, we were incredibly excited to have the first formal open house!

Two days later, the Lake & Company office was scheduled to tour it after the weekly Tuesday morning meeting. Events of that day consumed any enthusiasm for the project.

There’s a saying in real estate, “Interest never sleeps,” and there was a construction loan to pay off, so we had to go about the process of getting the units sold.

Our photographer, Kristy Lindgren of Eucalyptus Photography, submitted photos of the project to Dwell Magazine. The editors got the idea to nominate us (it’s a community property state, so the spouses got credit, too!) as Nice Modernists, and we were feted at a ceremony at the Smithsonian / Cooper-Hewitt Museum in 2002!

Two of the original four owners are still there. One family who bought the top floor unit decided that a household with two children would be easier to manage in a single-family home, and another owner left to pursue a career opportunity out of area.

Although we haven’t undertaken another project like this, we know to never say “Never!”